skip to main | skip to sidebar

Dancing (and Banjo-pickin') in the rain

Guess what I found? My battery charger! 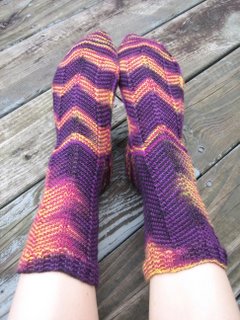 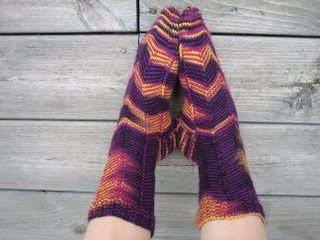 Pattern: Jaywalkers, of course -- though I call these the "Batman socks"
Yarn: Knit Picks Sock Garden in "Pansy"
Needles: Metal dpns, size 1
Begun: (this is embarassing...) 7 February 2006
Completed: 10 July 2006
Thoughts: These took me long enough! But... I'm really happy with them. For some reason, the pooling in these socks was almost identical. I could have made them more similar (when choosing where to put the heel) but decided that I liked the almost-mirror image of them. I call them Batman socks for two reasons -- my friend Sara (for whom these are a very, belated Christmas gift) has had, since our sophomore year of college, the nickname Batman. All of my friends still call her that: "Have you talked to the Bat lately?" or "Hey Batman, can you pass me that bottle of wine?" or "Bat, awesome green car!". Yeah. I mentioned back in February that this name has stuck so much that her mom is referred to as "The Batmom." All because she dressed up as Batman for halloween that year (strange, that our friend Amy who dressed as Robin was never once referred to as Robin after that day). I also call these Batman socks because the colors seem very Batmanish, which makes up for the fact that they are nowhere near as purple (the Bat's favorite color) as I had wanted. I hope she likes them...

I also finished the first of the River Rapids socks for my mom, in the Nature's Palette (yummy, yummy, yummy) that I got from Pure Knits.

I cast on for the second last night... hopefully an FO by next week.

Today, I'm on my way to the Fiddler's Convention in Tazewell, Virginia, where I will be competing in my first flatfooting competition. I'm nervous and excited about it... I've never even seen a flatfooting contest before, so I'm not sure what I'm in for. A lot of these old guys are amazing dancers, and I don't know what the folks up in Tazewell like (there are different styles of flatfooting, ranging from flashy to really understated). I also only have rubber-soled boots (leather would be better) and I'm worried I won't make enough noise... We'll see. Motivated by my goal to place and get a ribbon this weekend, I did this last night:

That's a registration form for the Galax Old Fiddler's Convention.

I'm officially registered (or will be, once they receive it!) for their dance contest too. The Galax Fiddler's Convention is an old time, big deal. It's a week long, it's been happening forever (71 years) and it's pretty well known. Eeesh! Maybe I need to make myself a pair of "dancing socks" for luck :)
Posted by jennie at 08:40

I dont think I ever met (even on the net) a person who can do that. Do you have any MP3's of your work? I think it would be a great sound to knit to -
You may want to think about it if you dont.

If you do, please let me know :)
Ill donate a couple bucks for your Fidler/Dancer cause :)

We had a great flatfooter in my home town who would dance on the side of the stage to EVERYTHING that came along to our local weekly free concerts - I mean, jazz, reggae, old timey, rock, whatever. My friends and I called him "The Dancin' Fool". He was great. Sadly he passed away, but he is missed, even though we never really met him, we just watched him dance.
And Galax...sigh. Take lots of photos for us.

I love those Pansy Jaywalkers (hee hee, that's fun to type, too!). It makes me very excited that I have two balls of that yarn... Love how the River Run sock looks, too!

jennie
I'm a grad student relocated from the wilds of west philadelphia to the wilds of southwestern virginia. as a result, i knit. a lot. i also listen to a lot of music (that is, after all, why i'm here).

This is a Flickr badge showing photos in a set called Knit. Make your own badge here.